On March 3, 2020, a series of devastating tornadoes tore through much of Nashville, Tennessee and the surrounding areas. Wind speeds reached 175 mph. In the storm system’s wake, 25 lives were lost, and many structures were destroyed.

Mohammad Moravej, PhD, a forensics and restoration engineer at Walker Consultants, joined a group of fellow engineers and natural hazards researchers to collect data about how the tornado affected structures in the area. The trip is part of a long-term project to improve construction practices and building codes to reduce the risk of catastrophes in future tornados and extreme wind events.

The team acted quickly and arrived in the field only five days after the event, allowing them to collect key data while the effects of the tornado were “fresh.”

The group of academics and practitioners were organized through a nationwide consortium of universities known as StEER (Structural Extreme Events Reconnaissance) network. Mohammed was deployed as part of a FAST (Field Assessment Structural Team) to collect data on the performance of various types of structures in the tornado.

Below, Moravej shares his experience.

Walker Consultants: How did you become involved with StEER and their FAST program?

Mohammad Moravej: I first joined in the reconnaissance mission to the Florida Keys following Hurricane Irma. That mission was at the first stages of the formation of StEER. Thereafter, they formed a permanent group, designed a membership system, and created a database of volunteers. The volunteers with relevant expertise and experience become members of Field Assessment teams and are invited for deployment to sites shortly after each event.

WC: What other teams did you interact with? Local government or volunteer groups?

MM: StEER had coordinated with local authorities and officials, primarily TEMA (Tennessee Emergency Management Agency), which allowed us to access the site so soon after the event.

WC: What were the conditions you saw in the field?

MM: Tornados affect a narrow band, compared to hurricanes which cover a vast area. Near the tornado path, there were a lot of uprooted and snapped trees and partially to fully destroyed buildings. Slightly farther, a block or two away, everything was intact. 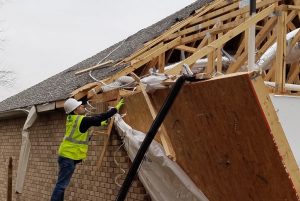 Outside the affected areas, the situation for the team was generally good. We were staying at a hotel and the only issue we had was a lack of internet connection, as many of the utility lines were severely damaged. In the affected areas, the setting was much harsher. With limited access to restaurants and restrooms, we usually started early, from about 6:30 or 7 a.m., and then continued until sunset. We usually skipped lunch to get the most out of the daylight and cover as many areas as possible.

In the evening, the team gathered in the hotel to review the areas that we had covered, plan for the next day, and write a daily summary, which kept us busy until midnight.

WC: What kind of damage did you observe?

MM: We saw all sorts of damage. We saw total devastation… the collapse of buildings, cladding damage, roof and wall failures–particularly at the roof to wall and wall to floor connections. And those total failures were observed at both residential buildings and large commercial and industrial buildings. There were also occasions of damage due to impact by flying objects like cars and trucks!

WC: The pictures you shared are powerful. Can you speak to the spirit of the Tennessee community and the team in the field?

MM: One of my favorite shots is the picture with the American flag. It was interesting to me how these people who have lost a lot and are suffering the consequences of the tornado unite around this flag and keep themselves strong!

Everybody on the team was very active and it was a collaborative atmosphere. We were trying to collect as much data as we could, so we were moving quickly. All the team members were enthusiastic and serious about the job they were doing, although it was physically very exhausting. It was unpleasant to see people’s properties destroyed and the pain they were going through. We countered this by having dinner together as a team, where we had productive discussions and shared our backgrounds and expertise. 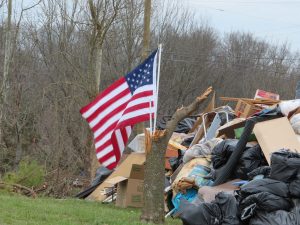 WC: What kind of data was collected and how was it collected?

MM: The entire process was a collaboration between our field team and a remote team.

We made a preliminary assessment based on aerial imagery, estimated tornado path, and information from local collaborators. Using that data, we identified the highly damaged zones, which included all types of structures: residential, commercial, industrial, both new and old.

A mobile app was developed with the Fulcrum platform. Each team member used the app to locate the properties, conduct live inspections, and upload pictures and information about the types of damages and status of the property. The data was synchronized in real-time to a server and marked on a map accessible to all team members, both in the field and remote members who were monitoring and supervising the process.

Besides a door to door assessment, we were also doing drone imaging, street view scanning, and limited Lidar scanning.

WC: Why is timing important?

MM: Fresh damage data are very valuable. Early damage data is perishable, which means the later you go out in the field, the less damage you can observe, as the clean-up and repair efforts begin rapidly. Of course, we always have to wait a certain amount as to not interfere with the activities of first responders and rescue efforts, as well as ensure the site condition is safe enough to gather data.

For example, we arrived at one site earlier than planned, and started the investigation a day sooner than the scheduled time. With a day’s head start, I could inspect a collapsed industrial building. When we went back to that area later, at the originally scheduled time, the whole site was closed and debris was being removed. We would have missed valuable evidence for our data collection.

WC: How might this data be used in the future?

MM: The collected data helps to identify the type of damage a tornado inflicts to buildings, to evaluate the performance of different structural systems, and to identify the weak points in buildings. This data will help improve construction practices and building code requirements to mitigate the hazard from tornados and extreme wind events and to help prevent catastrophic losses in the future. Besides the technical aspects of these studies, social aspects are also very important. When people have a better understanding of the risks that natural hazards can introduce to their property and lives, they become more willing to accept new safety measures for themselves and their properties (in terms of improving their buildings if necessary). To study those aspects, we had social scientists on board as well, who were conducting interviews with the homeowners.

WC: How does this tie into the work you do at Walker Consultants?

MM: There is an interesting relation. With most forensic projects at Walker, we are hired to inspect damaged properties at least one year after the event. In those cases, a lot of clean-ups and immediate repairs are done. Most of the damage is not obvious or readily seen. Our role is to carefully look for the clues and do the investigation with a high level of scrutiny, looking into the very details of everything.

In this case, with the damage reconnaissance occurring immediately after the event when the damage is fresh, there are a lot of visible and bold damage scenarios detectable. Also, in this type of, event aftermath investigation, we usually do not enter the properties and mainly study the overall behavior of the system.

The two types of work do complement each other. Having a good knowledge of the overall performance of the buildings derived from field investigations help to better identify the mechanisms causing damage to building components.

Through this collaboration, I learned about the efforts researchers are making to implement high-tech tools and smart algorithms to process damage data. Back at Walker, our forensics team discussed the ways we may benefit from these studies and findings to enhance our work procedures and adopt more high-tech tools.

Thanks to Mohammad for your dedication to the research and to the community in Tennessee.  You represent the true spirit of Walker.